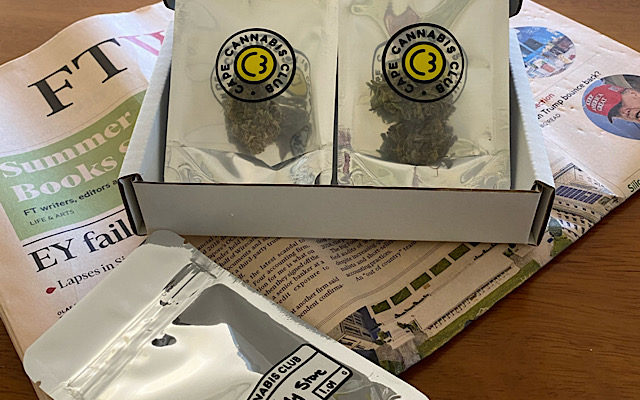 If you’re new to the gig, welcome – read this to see how the premium cannabis growing members club works.

As someone who likes to be creative, whilst getting into ‘the zone’ on my iPad, I opted for their sativa rich ‘Candy Store’ strain, as I had a lot of work to do. For the uninitiated, ‘sativa’-based cannabis is a more energising experience, whereas ‘indica‘ tends towards body relaxation.

The goods were delivered in plain sight on last Friday, which was perfect, as I had lined up some work for the Saturday morning, whilst the kids were out riding with mum.

First off, I was impressed with the packaging.

I fired up the PAX 3 and, wearing my heavy, black robe, I prepared to wave off the little freaks to have the house and iPad to myself. On first acquaintance, the strain – Candy Store – had a sweet smell – which might be the reason behind the name.

It was very smooth. Not surprising, with the PAX 3.

I froze, realising my morning was crumbling before my eyes. Regressing to a state of denial, I went upstairs to the mother ship and turned on the iPad. Not 18 seconds later came cries of “dadaaaaa”.

Holy shit, I thought to myself. This is not going away. Looking out of the window I could see the whole team had the bicycles out, and mother was pondering the chain of one of the adult bicycles.

“Whatsup, guys”? I cheerfully pretended out the window.

“It’s making a noise”, responded mum, pointing to the chain area of her bike.

I snapped into Pleasantville mode – “be there in a sec, darling!”

I ran down to diagnose.

It seems the casing around the main cog had come loose and was scraping against the chain. A ‘three by ten mil’ nut and bolt would probably do the trick.

I told the family to sit tight, as I put on a full, red top and bottom PUMA tracksuit, HBS beanie, Tom Ford shades, a mask, and jumped in the car – destination Constantia Hardware. I managed to squeeze in two tracks from the new Bob Dylan album, which I highly recommend.

Mere minutes later I was back, fixing the offending machine to my family’s delight.

A break was needed and everyone agreed dada was due a bubble bath. It is customary in our household for dada to have a bubble bath – on his own – with a cold Sol beer, on Saturday and Sunday mornings.

I urge new fathers to establish these regular, fun (selfish) pleasures early, so that before anyone realises, they’ve turned into tradition.

The rules were bent that winter’s day, as the eldest decided to join me during this incredibly sacred ceremony. I managed the jarring interruption with surprising ease, as we spent half an hour contemplating what names she would give to the plush toy with the blue hair at the shops, which would complete the set she had been acquiring over time. That was IF she ever managed to get the toy – something that was based entirely on her behaviour, which would be monitored over the next day.

I think we settled on ‘Loomi’ as the name, for whatever much-debated reason.

I got changed close to noon and, as luck would have it, there were two pictures that needed hanging. It just so happened that was exactly what I felt like doing. First the drill – wall too hard. Then a couple of masonry nails. Besides hitting my thumb (only once) with the hammer (very hard – it still hurts), the pictures were hung up at the perfect height, perfectly straight and with perfect symmetry.

Victorious, I retreated to the mothership and cracked open the iPad. It was only midway through an article I was writing about beer shandy, that I remembered the Candy Store from earlier.

Thinking back to what I had actually achieved and experienced during the course of the day, it’s quite hard to imagine getting through everything I did without a hiccup. Don’t get me wrong – I would definitely be able to complete all the tasks, but I can’t be sure it would have been with that much… you know… FERVOUR!

This is the thing with premium cannabis, and the reason why things are progressing so rapidly with regards to the benefits and legalities thereof. Whether it’s for pain relief, or simply choosing your own adventure, the days of getting stoned on the sofa with a packet of Flings and sloth-like movements are over.

And it’s not just something for teens – parents are finding it pretty useful too. No wonder they’re saying weed mums are the new wine mums!

From my side, I look forward to trying out ‘Double Tap’, once I get out of the Candy Store. Their website says it’s on the strong side.

I suggest you have a good look around at what the Cannabis Club (or C3) offers, do your research, and then pull the trigger.

Added bonus – if you sign up now, they’re giving away a free gram of their premium bud for free.

C3 will also answer any queries, as well as provide additional information on its services, via info@capecannabisclub.org.